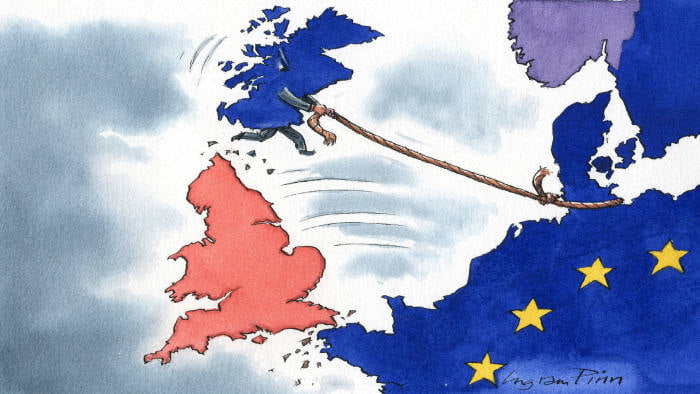 “Two roads diverged in a wood and I took the one less travelled by, and that has made all the difference”.

So goes the Robert Frost quote. The implication, of course, is that the road less travelled may be a more difficult one, but it is often a rewarding and fulfilling path to tread.

This image—of striding out into the world and forging a path of originality—is one often touted by Tory hard-Brexiteers. Post-Brexit ‘global Britain’, they say, would be able to capitalise on market opportunities across the world in a way that wouldn’t be possible when conforming to EU rules and standards limiting what businesses could and couldn’t do.

They argue, if we were outside the EU, businesses would be able to produce products cheaper through ‘better deals’ with other nations that can provide cheaper access to materials. They argue that businesses would be able to make savings by outsourcing production to places with cheaper labour costs. They argue rigorous EU standards would no longer have to be met, reducing production costs.

These propositions are fatally flawed.

For a start, in a world of free-market competition, the road less travelled is the one taken by the EU.  It has diverged from a global norm of less-strictly regulated markets to—by their own admission—a comprehensively regulated, high-standards economy.

It is also not true to say that these regulations have necessarily been limiting to Scottish and UK businesses. Indeed, in spite of criticism, EU regulations have often been the impetus for more innovative business practices, increased global competitivity and greater prosperity.

This fact can be demonstrated in an area that applies to every element of modern economies: data and digital regulation. The use of data—now near-exclusively gathered by digital means—allows one to market to prospective customers; store their information; send them the products or services they have bought; conduct market research; speculate on investments; purchase necessary goods; run supply chains; and a huge amount more. Indeed, the creation, capture, storage and use of data provides means of facilitating nearly every business operation.

Boris Johnson and Dominic Cummings and other hard-line Brexiteers argued for the repealing of EU data and digital regulations after the UK leaves the EU. They said they were restrictive pieces of legislation that place limits on the way businesses can use digital and data practices to their advantage.

However, industry research shows that the overwhelming majority of Scottish and UK businesses think EU digital regulations have had a positive effect on their business. Furthermore, large numbers think losing alignment with EU practices would be detrimental to their business.

Ultimately, this is because tighter data and digital regulations were adopted, in part, in recognition of the fact that far too many businesses had been misusing personal data, and people didn’t buy from companies or use platforms they didn’t trust. They still don’t.

The EU recognised that businesses would have to treat data better in order to survive. And they took action to increase standards across business and beyond.

But new regulations did not have an inhibiting impact as the Brexiteers would have you think.

Indeed, with the EU’s tougher data and digital laws, businesses began to innovate better data-capture and privacy practices. Those that did this restored trust with consumers who were angry about the long history of data breaches and lack of data privacy. With the knowledge that they could no longer be taken advantage of thanks to EU regulations, customers engaged with the market and businesses became more competitive and successful.

What’s more, while regulations require implementation effort, it is often the case that they force companies to reassess and improve their business practices, which in turn facilitates better performance.

Furthermore, EU standards in this area are now being adopted by countries across the globe. Switzerland, Argentina, Japan, Australia, New Zealand (and on a qualified level, the US and Canada) have all chosen to match European standards of data and digital regulation in order to be able to compete with EU businesses on the global stage.

Being able to catalyse universal positive change across the world’s largest market and subsequently influence global market standards shows the benefit—and necessity—of being part of the EU.

While this is just one area of regulation (albeit an all-encompassing one), the theory that EU rules and regulations help businesses and the economy stands true elsewhere. In Scotland, the UK and across the globe, people no longer decide which products and services to buy purely based on price.

Research shows that consumers increasingly take into account other factors, such as businesses’ ethical practices; respect of consumer and workers’ rights; environmental sustainability; and quality standards when making purchasing choices.

Again, it has been the EU that has carved out the lesser-travelled path of regulating in these areas. Consequently, with demands for higher standards increasing across the globe, EU businesses are a step ahead of their competitors around the rest of the world.

The UK’s hard-Brexit isolationist economic strategy is doomed to fail businesses and the country. It will soon find itself in a shrinking pool of nations only able to profit from each other by undermining quality standards, workers’ rights and environmental protections.

Scottish businesses do not want this. It is time we move away from the UK’s unworkable go-it-alone strategy and move to join with our European friends in setting the global agenda for high-standards, innovative and rights-respecting economies.